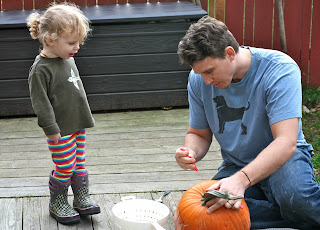 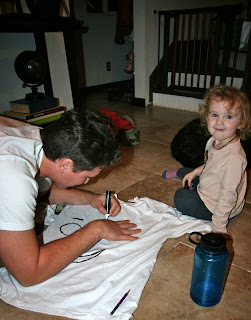 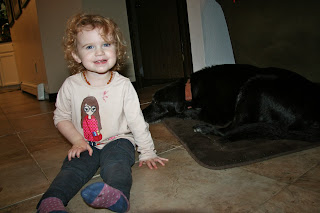 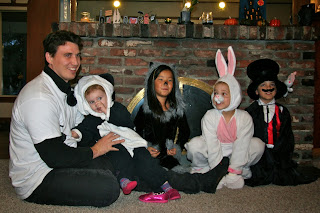 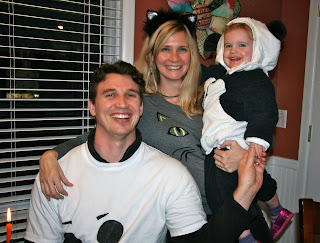 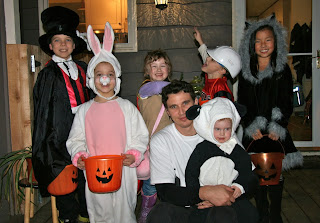 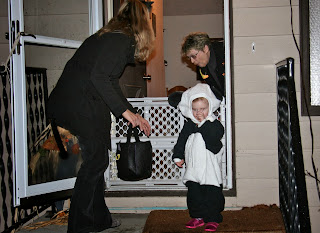 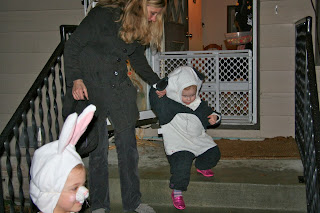 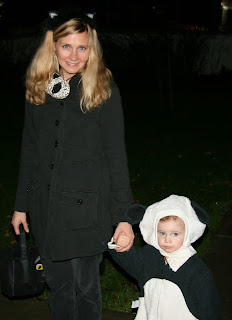 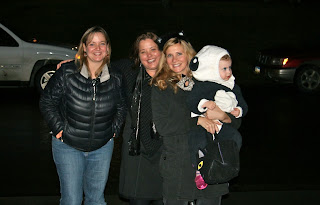 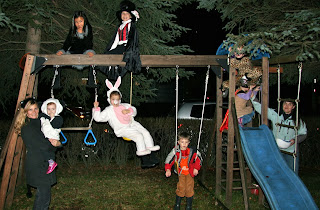 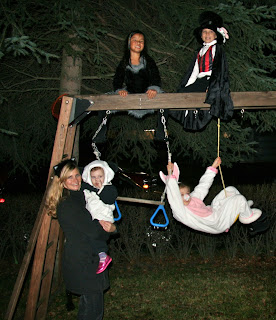 Ocoee has loved Halloween this year. We received a pirate costume to borrow a few months before and she practiced dressing up a lot. She still likes to hide at the front door and say boo! to scare her daddy when he comes home.

For Halloween there was a party at Ocoee's school where we sent some organic juice boxes and organic candy to share. We made treat bags with stickers and rubber ducks that were Halloween creatures. She dressed as a pirate for this party.

I was so excited for her party. I signed up for a cheese tray and picked up hubby and arrived right at 3. On the way to school that morning Ocoee had said she, "Was ready to party!" I thought heck yeah that is my girl! When we arrived though she was her daddy's girl and said, "Ocoee go home". She then cried and clung to me the rest of the party. By the end she was doing better and eating her fruit and licking the icing off the suspiciously orange cupcake. I thought I was being clever by taking the icing and wiping it off on her plate, but she just took the cupcake and dipped it in the icing on her plate.

After the party we went to our friends house who were having a party to start followed by trick or treating. Ocoee loves being around the older kids and felt more comfortable there. She is however, like hubby says more of a closer. By the end of the night she was ready to party all night, just as we were saying, nope bed time!

We had some chili and then set off to houses. For this event Ocoee was a panda. This was also given to us by a friend and was super warm so perfect for Alaska trick or treating. We all felt so blessed that there was no snow for the first time in forever on the ground and it was warm in the 40's.

My goal was 3 houses. Ocoee did her first 3 not so successfully. She didn't really carry her trick or treat bag, didn't want to say trick or treat or thank you and kept a wide distance between her and the candy givers. All except the house where the lady said she had dogs and brought them over to Ocoee. Then CoCo marched right up and was excited.

We went back to the party after the 3 houses but Ocoee demanded to, "go more!'. So off we went. She did do a little better but really just wanted to ride on daddy's shoulders and walk the streets looking at the other trick or treaters. She also liked giving candy out back at the party.

But she was damn cute in her panda outfit. Small kids as animals are just fun!

She still says shiver me timbers and walk the plank at home all the time. She asks me where my tail is. I had to dress as a cat since she decided that for me weeks before the big day. She will also just look at me and meow. Daddy had to be a ghost and they worked together to make a fun ghost shirt for his costume.

She also has learned to be afraid. She has never said she was scared or afraid before but with all the Halloween talk she has learned to be afraid. It is sorta sad to me but also kind of funny. She decided a orange squeeze monster ball she got from a goodie bag at school was scary and was hiding from it. Even after I kissed it and said it was a nice monster she was afraid. She literally shivered with fear when I held her....it was so silly and genuine at the same time. I couldn't help but laugh.

We had a blast carving pumpkins and just getting into the holiday in a way we haven't in a long time. Kids really do make holidays fun.