The weekend started off with 3 bouquets of flowers from Hubby. One for my bday, one for mother's day and one for our anniversary. He worked very hard to make all three events special.

We grabbed some poboys from the Gumbo House, downtown Anchorage. Man are they tasty. Being from New Orleans I can be picky about my poboys, but these are impeccable! We grabbed the last minute items, loaded Ocoee and were on the road to Trapper's Creek.

Hubby rented a cabin for the weekend. It was one of the best stocked VRBO's we have stayed in. The lake was still frozen so hubby couldn't fish....he actually looked and the frozen lake and sighed, saying..."I didn't really care that much about fishing, I just wanted to spend the time with you." I almost peed myself laughing so hard....yea right!

After the 3 hour drive baby went right to sleep in her peapod in her own room and we made a nice fire over looking the lake. We drank a bottle or two of wine and talked. You know the kind of talk you have when your drinking vino, a fire hisses and crackles at your feet, filling your nostrils with the sweet smell of birch wood and your nearest neighbors are miles away. We had nothing to do, nowhere to be...it was bliss.

Saturday I woke up to two birthday cards, one from hubby and one from baby. I will have to put Ocoee's in her baby book because she grabbed it and ate the corner....she is loving paper these day. I fished the paper out of her mouth, much to her dismay. We had lunch at Mountain High Pizza Pie. Ocoee had her first bite of pizza (she loved it) and we are learning she does really well in resturaunts. She likes to look at people and feels part of the fun in her high chair. Car rides on the other hand bore her to tears (literally). Just a few months ago she snoozed so easily in the car...now she fusses and chatters away non-stop.

After lunch we walked around Talkeetna and hit a trail where we saw our first fox in Alaska. Now I just need a polar bear and a wolverine and I will be set! Back at the cabin there was more food, wine and chilling. It was so relaxing and I was happy to spend my birthday with my two favorite people. On Sunday I woke to more cards for mother's day and another fire while baby napped. We had a late lunch at the Denali Brewing Company and Twisted Sister cafe. Best veggie burger I have ever eaten.

Then came the big event....my first flight lesson. We arrived at the airport and were happy the skies were clear. As pilot Lance went over the instruments with me, Hubby snapped some pictures. I will post these soon. He was so awesome and supportive, taking baby and tons of pictures too. We climbed into the tiny plane with me on the pilots controls up front and the pilot in the back, directly behind me, where he had controls as well. After take off Lance, handed the controls over to me. He taught me to do left and right turns and explained some basic aviation things to me. He then asked me if I liked roller-coasters, which I replied a tentative, "sure"....right before he started doing tricks such as the up and down of a roller coaster. We experienced 2G+ free falling sensations....wow!

He also cut the engine to show me that the plane would still glide and that we would have time to do a landing...he had 4 emergency landings due to losing engine power, 3 in the same plane and one in the plane we were in...crazy!

I loved being the in the plane. I was nervous and excited to be in control of the plane...even with Lance right there I was still amazed to be able to fly a plane. We were up for a little less than an hour..it seemed like mere minutes. Lance controlled for the landing and it was in heavy cross winds. He nailed it and breathed a big sigh of relief before telling me that the winds were very strong and about as much as the plane could handle....I would have never know, he did an excellent job. Back on the ground I received my flight log book. Only need 39 more hours to get my private license! I hope to take a few classes over the summer. It can be spendy, but it really is something I enjoy. 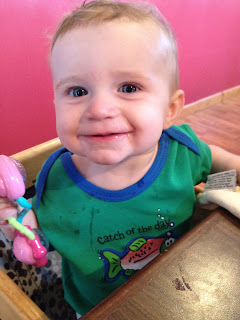 Ocoee wearing her new onesie, that we dashed to the gift shop to buy due to a little "accident" right before lunch. She really is the catch of the day! 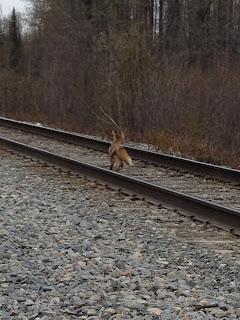 The fox we saw while on a little hike in Talkeetna. 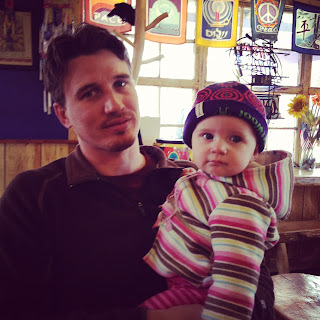 Hubby and Ocoee at Lunch. 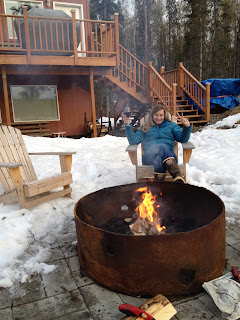 Relaxing, drinking wine by the fire...yep still snow on the ground! Trappers Creek received over 200 inches this winter. 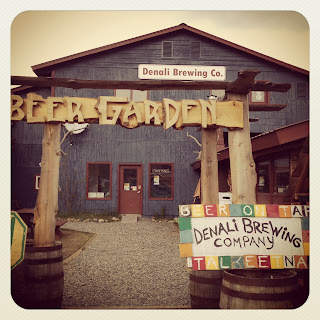 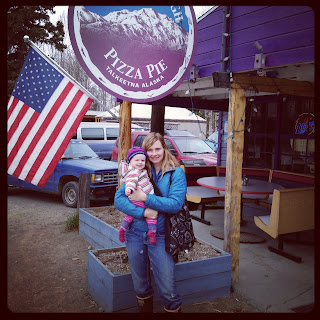 Birthday lunch at Mountain High Pizza Pie....lots of climbers on hand getting ready to tackle Denali. 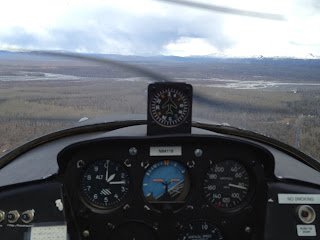 My view during my flight lesson.

I went to be last night thinking I have it all. Thanks to my wonderful hubby for making the weekend so special for me. Best Birthday and Mothers' Day weekend ever!


Also check out this super cool website. I love taking pictures and hope someone does this with some of them in the future.